We're growing summer squash this year although I'm plotting to plant at least a few hills of cucumbers somewhere soon.
Is anyone raising gourds this year?

According to a new study conducted by researchers at Penn State University, appearing in the Proceedings of the National Academy of Sciences, cultivation of the wild version of gourds and squash saved the plant from extinction.

Before humans roamed the earth, prehistoric animals often ate wild cucurbita --precursors to these winter vegetables, which had a tougher rind and was more bitter than the pumpkins we know today.

Over time, climate change and the extinction of many large mammals—which facilitated the seed dispersal with their feces-- nearly caused the cucurbita to be wiped out. Without giant grazers, the land quickly filled in with thick vegetation which took away the open spaces that allow ground plants like pumpkins to flourish.

But when humans appeared on the scene, about 14,000 years ago, scientists say they began cultivating remaining strains of the cucurbita.

“There was probably a long-term retreat of wild populations into ecological refugia, habitat zones that were able to support the wild plants even in changing conditions,” explained Logan Kistler, the study’s lead author, to Popular Science. But eventually, most of the wild types disappeared entirely.

Domestication likely began in the area that is now Mexico and continued up toward North America. Due to the plants' bitterness, Kistler says the early cucurbita offspring probably wasn’t eaten but rather dried out and used for containers and tools. Humans also cleared out large patches of vegetation to establish new communities, thus providing an environment for the squash to flourish once again.

As farming technology advanced, scientists believe that the cucurbita was bred to be sweeter—much like farmers use breeding techniques today. Eventually they evolved into the modern version of pumpkin and squash we cook with today.

Kistler says that pumpkins have evolved so much due to human cultivation that, “one of the common types of canned pumpkin that a lot of people in the U.S. will be opening up for pies this season has no known wild counterpart [today].” 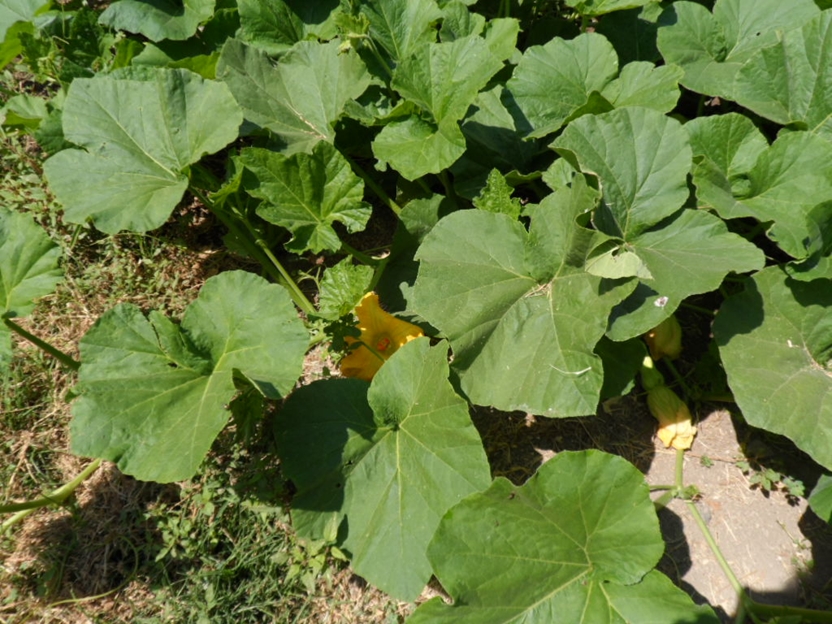 I have flowers and tiny proto-squash at about 6 weeks. The butternut squash will have about two warm months to grow, and then another month before first freeze. 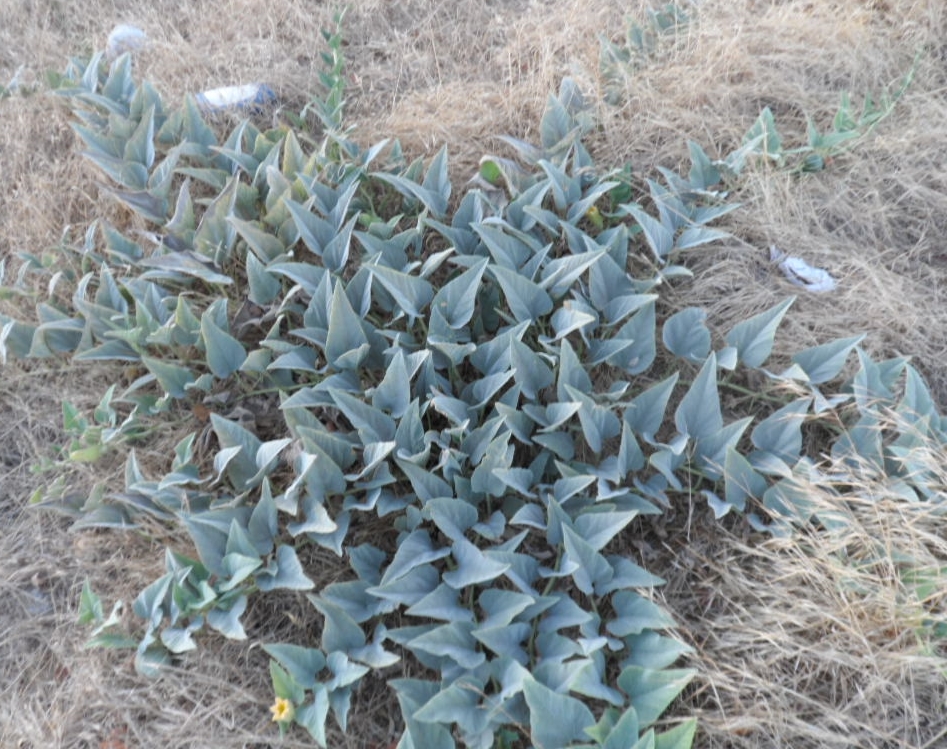 I can't take much credit for cultivating squash, when it actually grows wild, under very arid conditions. I'm not sure of the variety, but this may be what accidently cross-pollinated my C.moschata last year. 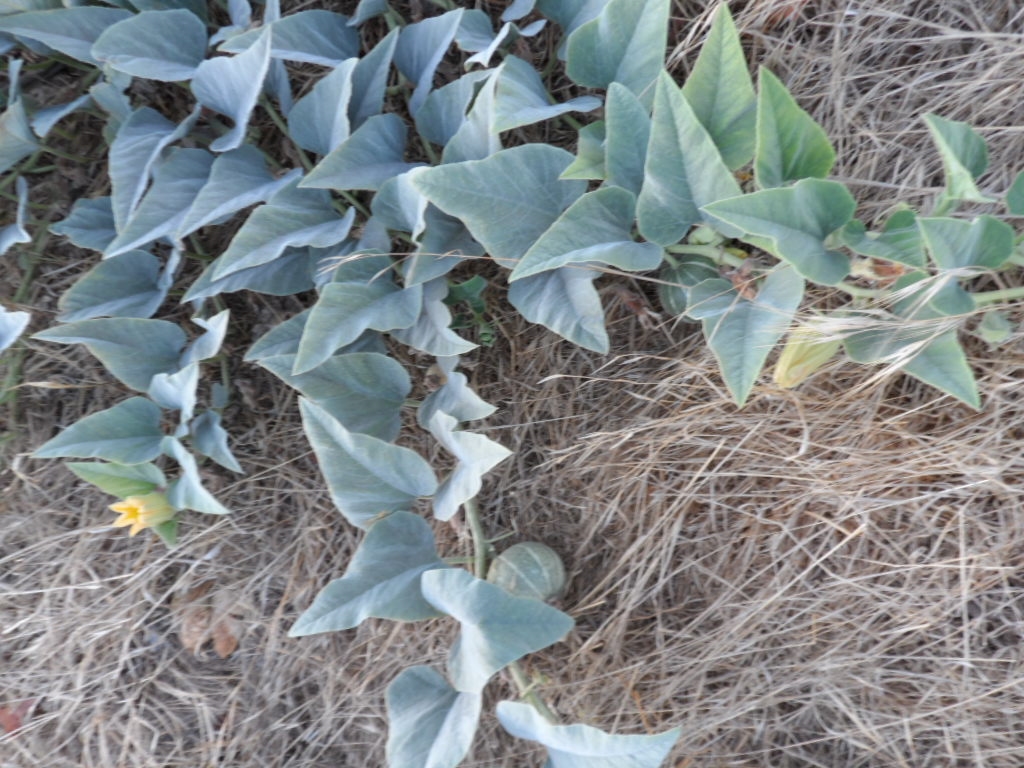 Here's a closer shot of the wild squash flower and fruit. Does anyone have a guess as to what it is? It's amazing that it can grow with virtually no rain for many months. Note: I think it's Cucurbita foetidissima, a wild arid species known by many names including buffalo gourd. 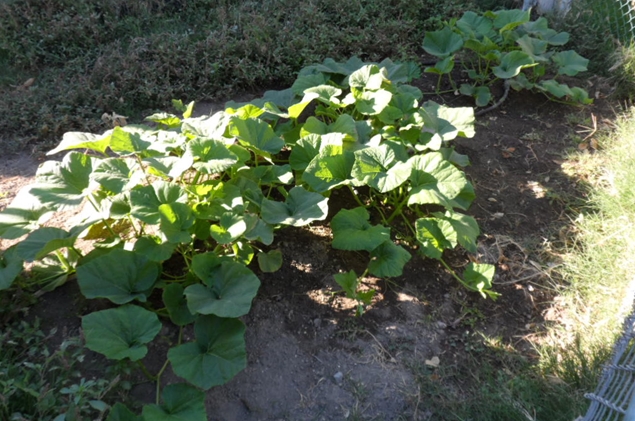 Here's my butternut squash. No flowers yet, but it's still less than a month old.

Really hot now as winds coming from the north. It was 105 yesterday and is forecast to be 102 today. I harvested the garlic and weeded the squash.

Here are three hills of squash 12 days after sprouting. 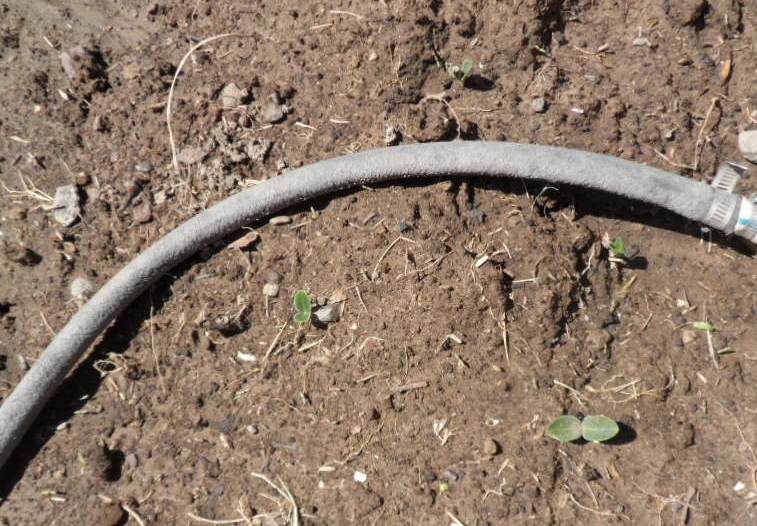 This years' Butternut squash just sprouted, on the fifth day. Here is a close-up of one of three "hills". Maturity is in 100 days, which will be late October. A little known fact is that most commercial "pumpkin pie" filling is really butternut squash. I keep the mature squash in the garage and make pies all fall, winter and spring. It hasn't been blisteringly hot this summer, which is good for everything in the vegetable garden. 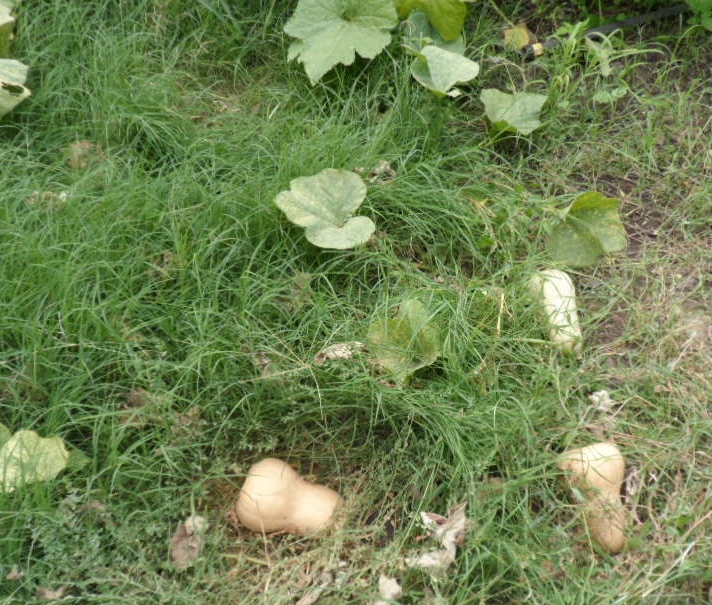 A few of my Butternut squash, in various developmental stages. Bermuda grass is all over the place, but I don't think it matters to the squash. I like butternut squash because you don't need to can or preserve it, it keeps for months in a cool place. 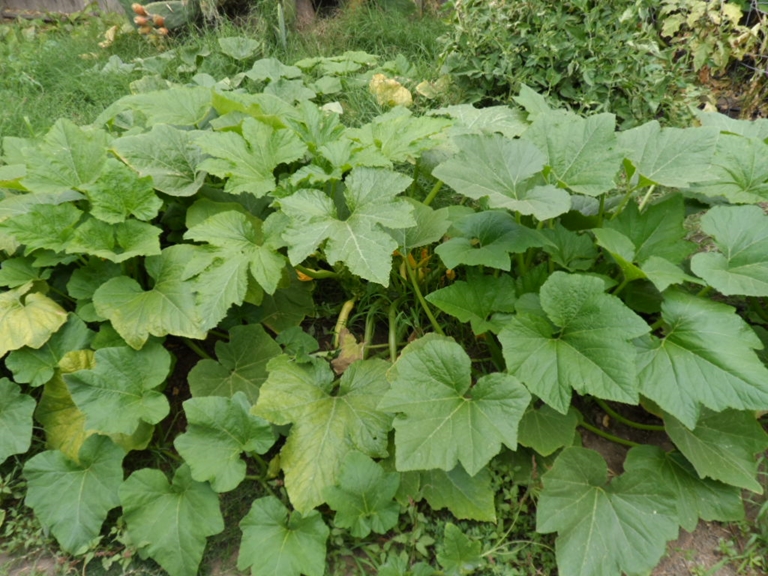 This year's crop of yellow squash is doing great. No bugs, and soon I can start picking. I freeze dry and also can this squash.

Can you guys tell me what this is? ( Collapse )

My south bed squash planting is bearing. Yellow squash (C.pepo) is in the foreground, and butternut squash (C. moschata) is in the background, with more rounded leaves. There is also one tomato plant in the right foreground:

It's a time lapse using an Ikea kitchen timer. Wish it wasn't this jerky, but still fun to view. I planted two sunflowers in the middle of the dome, and nest egg gourds and bottle gourds next to the mesh wire walls.
Collapse